on 9 october, we celebrated our fifth anniversary! five years! part of me can’t believe it’s been that long and the other part of me honestly has a hard time remembering life before it was shared with my ian. it has been a really wild ride, full of excruciating low lows but way more extraordinary high highs. i am so glad and so grateful that ian and i chose each other and committed to sharing our souls five years ago!!

our anniversary gift to each other is always a trip. (we spent our first and second anniversaries in paris, our third in the dolomites, and our fourth in the algarve!) this year we decided to go big and take a trip without our kids! we chose cyprus as our destination (one of the four remaining countries ian wants to get to in order to complete his bucket-list wish to visit every country in europe!) and coordinated with some of our friends to come stay at our flat and watch our boys. we trade off planning anniversary celebrations, and it was ian’s turn this year so he did all the trip prep for cyprus. we took off on our actual anniversary, feeling pretty giddy and super lucky to be able to share this adventure with each other (and not with our kids, haha).

when it comes to traveling without kids, the journey is almost as much of a treat as the trip itself. airports and airplanes without toddlers??…it feels like going to the spa or something, it’s so relaxing. haha!
we traded in england’s green and pleasant land for the aquamarine sea of cyprus: 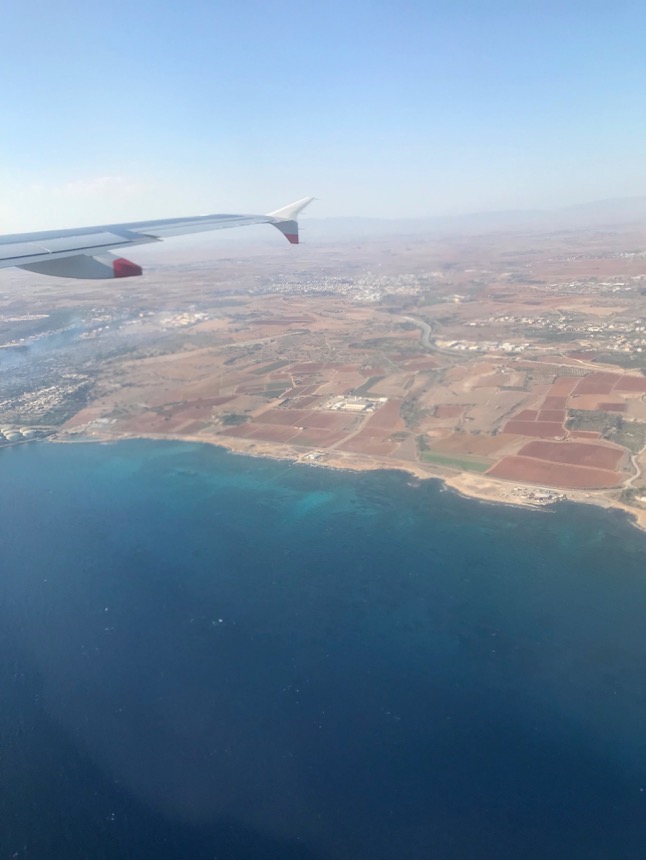 and headed straight to where we were staying, a secluded little b&b overlooking the ocean. we got there right at sunset and cuddled up on a lounger by the pool. it felt like heaven as the world glowed. 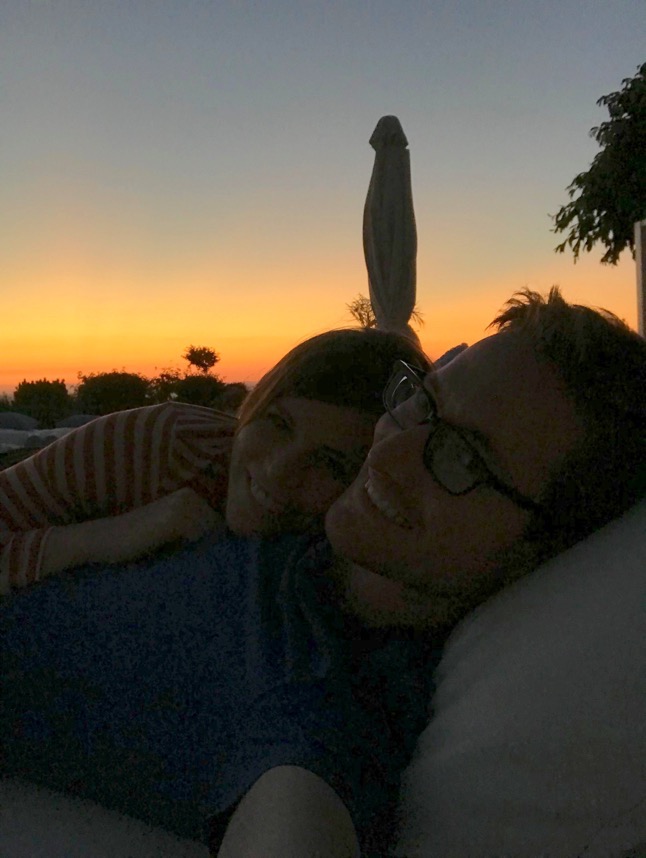 we had a nice anniversary dinner at a village nearby, then came back and sat under the stars as i presented ian with the video i’d made for him. each anniversary i add a year to a video that goes through all our adventures from the year. it takes me a lot of time to compile everything, but it is so worth it. ian is hard to give gifts to, but this is one that he loves. each 9 october, our cheeks hurt from smiling so hard as we watch the video and reflect on how good life is together.
all the mornings on our trip we took it eeeeeeasy and took our sweet time waking up, having breakfast, and getting out exploring. whenever i’m without my kids i’m always conflicted about if i should relish relaxing or relish getting things done/having adventures. we had a good mix of these on our anniversary trip.
after some lounging, we headed out to explore the island and we found the actual bluest water in the world. seriously, it must be! we found several different swimming holes and had a blast jumping in and swimming and floating and enjoying under the hot cypriot sun. there was some cliff jumping and may or may not have been some skinni-dipping 😉 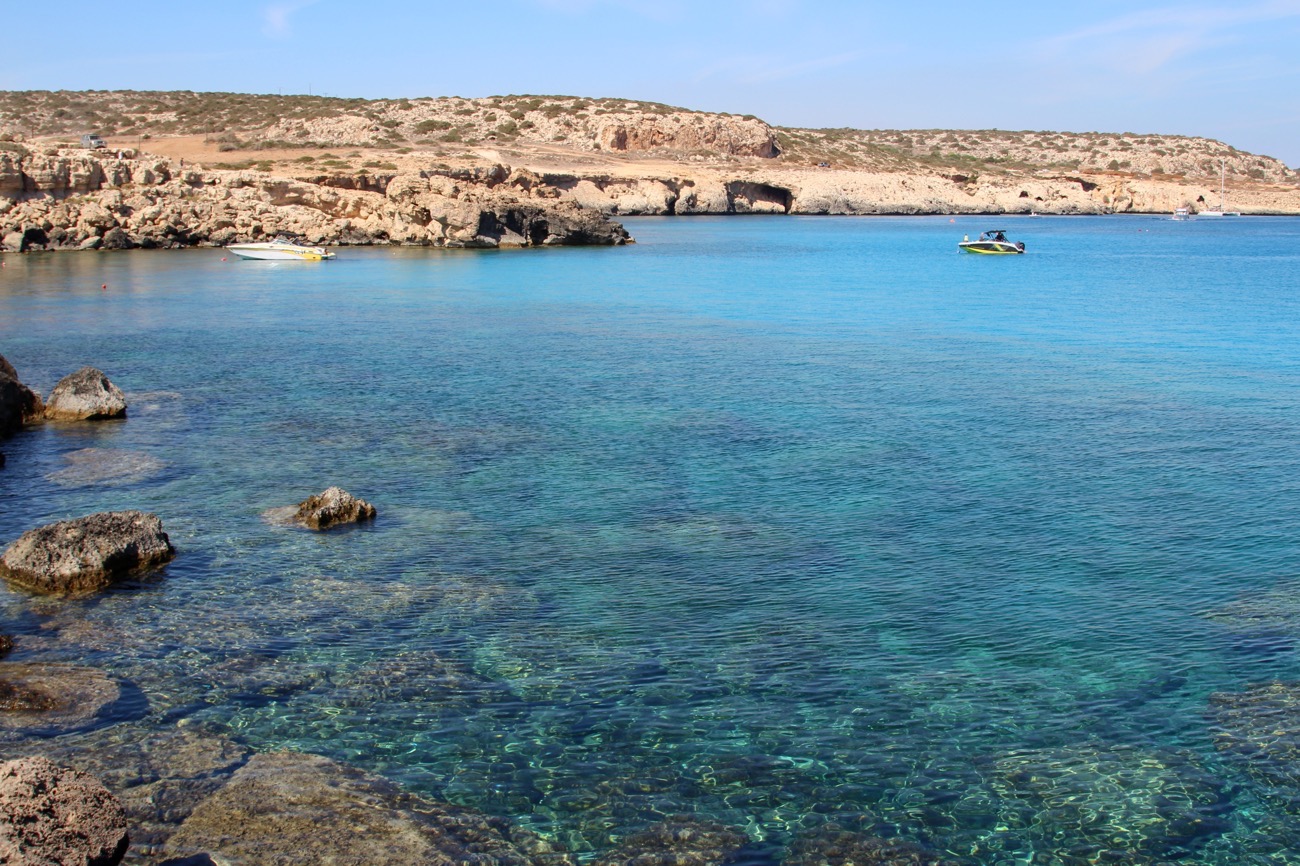 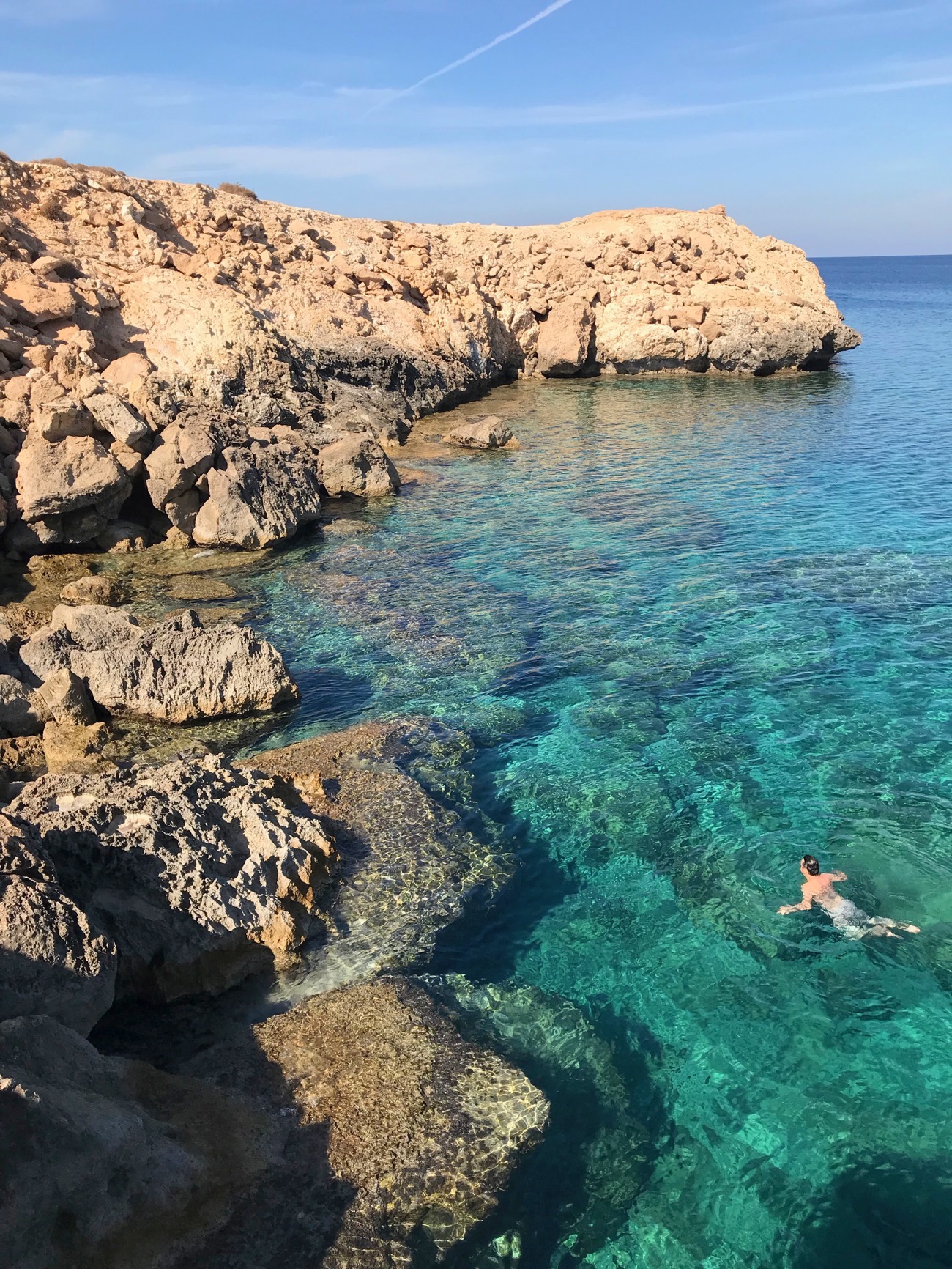 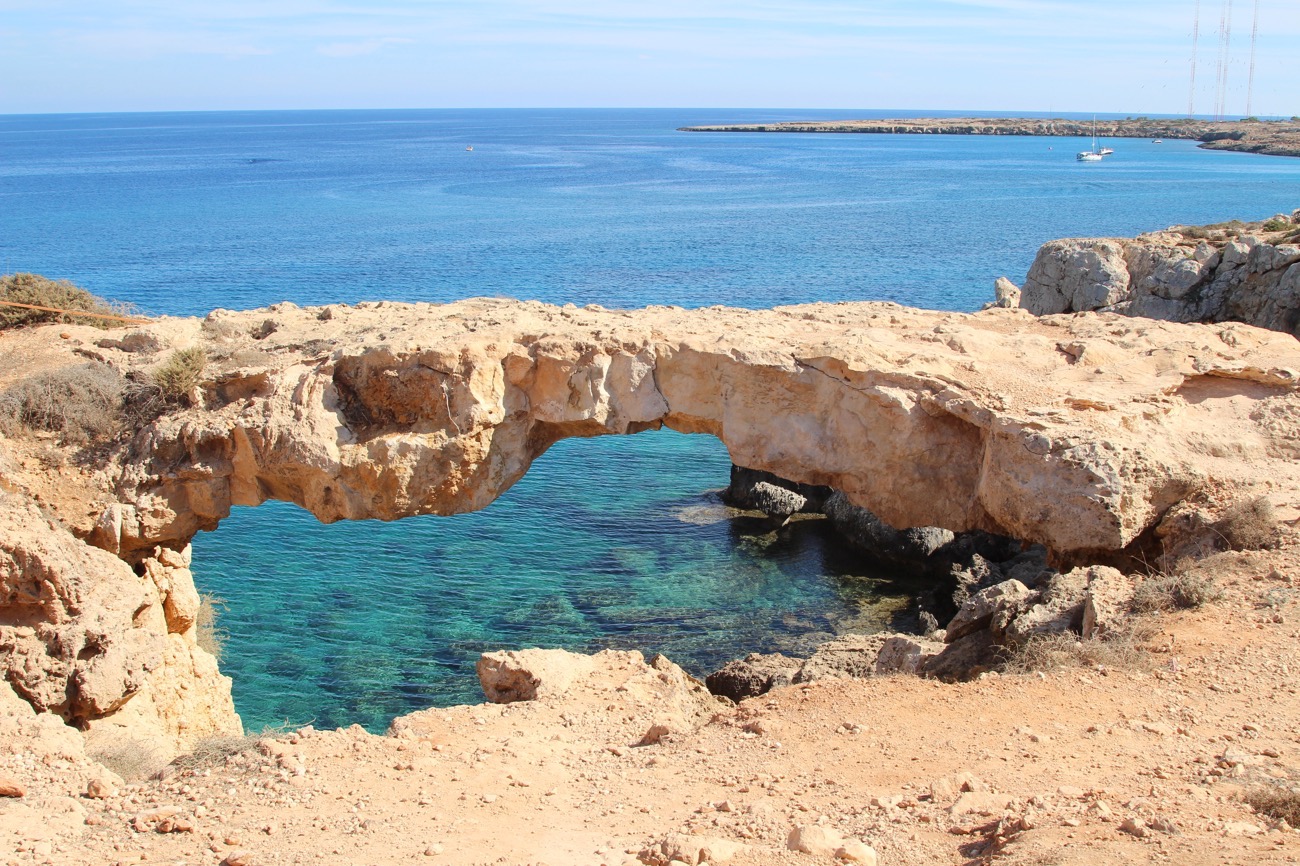 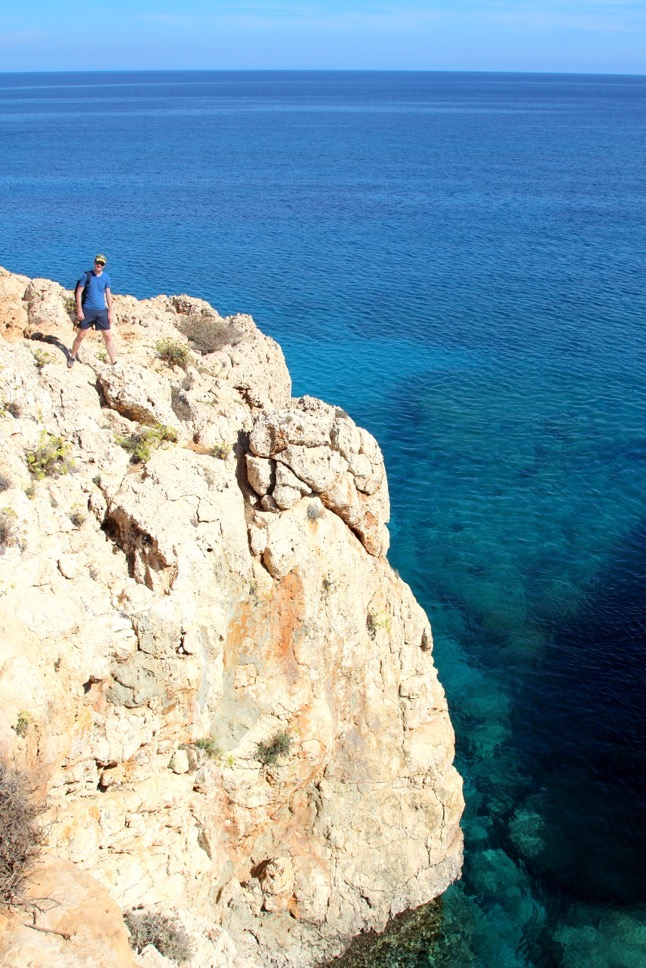 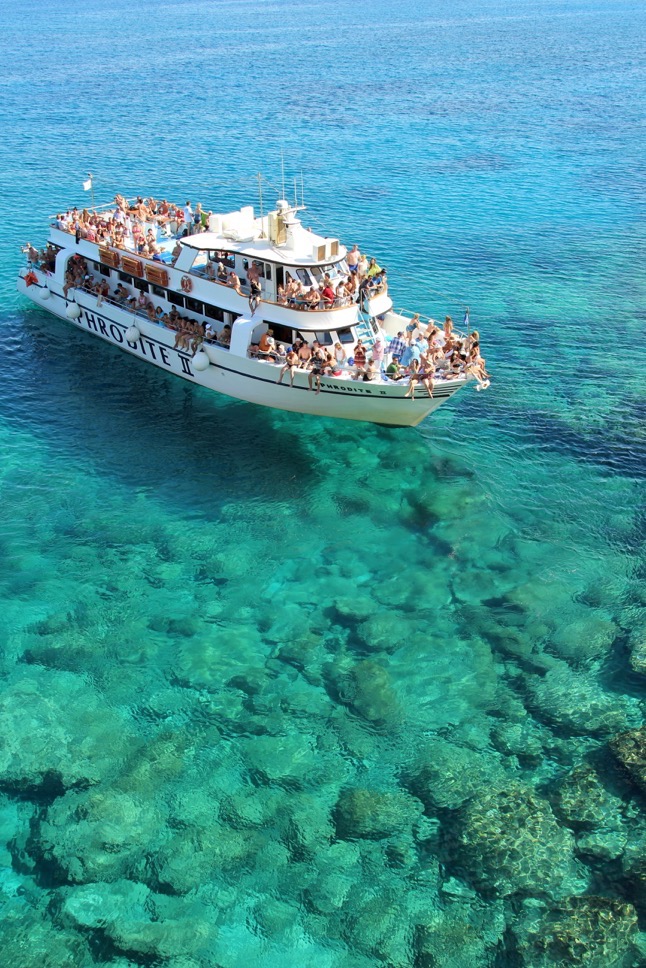 that night we got a beautiful, entire-sky illuminated and coloured sunset!

the next day we decided to follow a faded, beat-up sign pointing down a random road that said, “sea caves.” good choice. this is what we found at the end of the road: 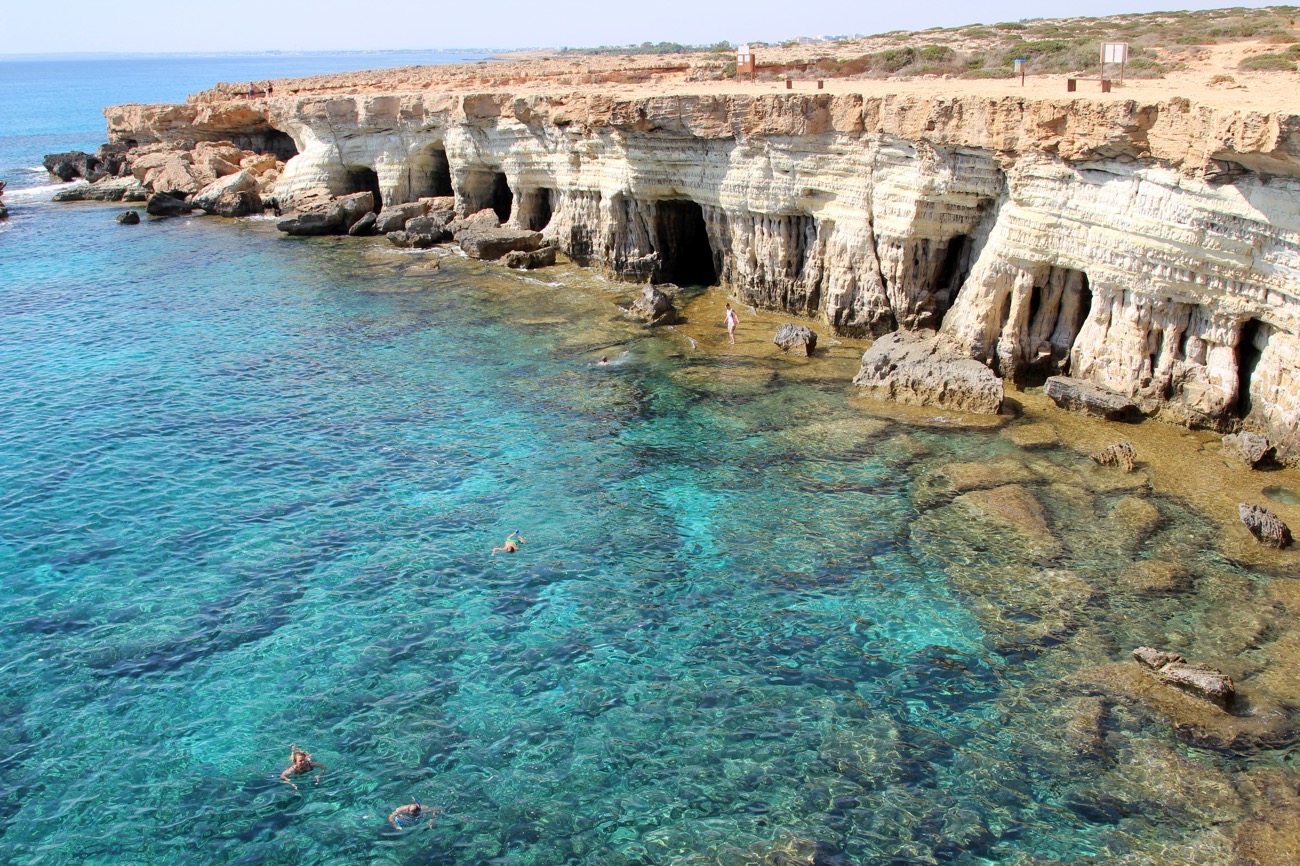 we enjoyed that amazing swimming hole (and exploring into the caves!) for a couple of hours and it was so fun! 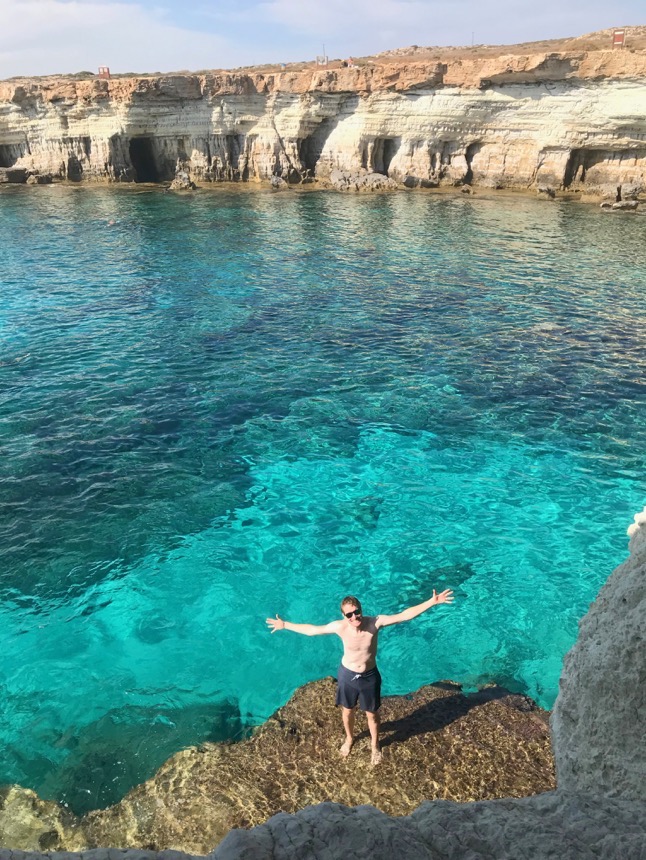 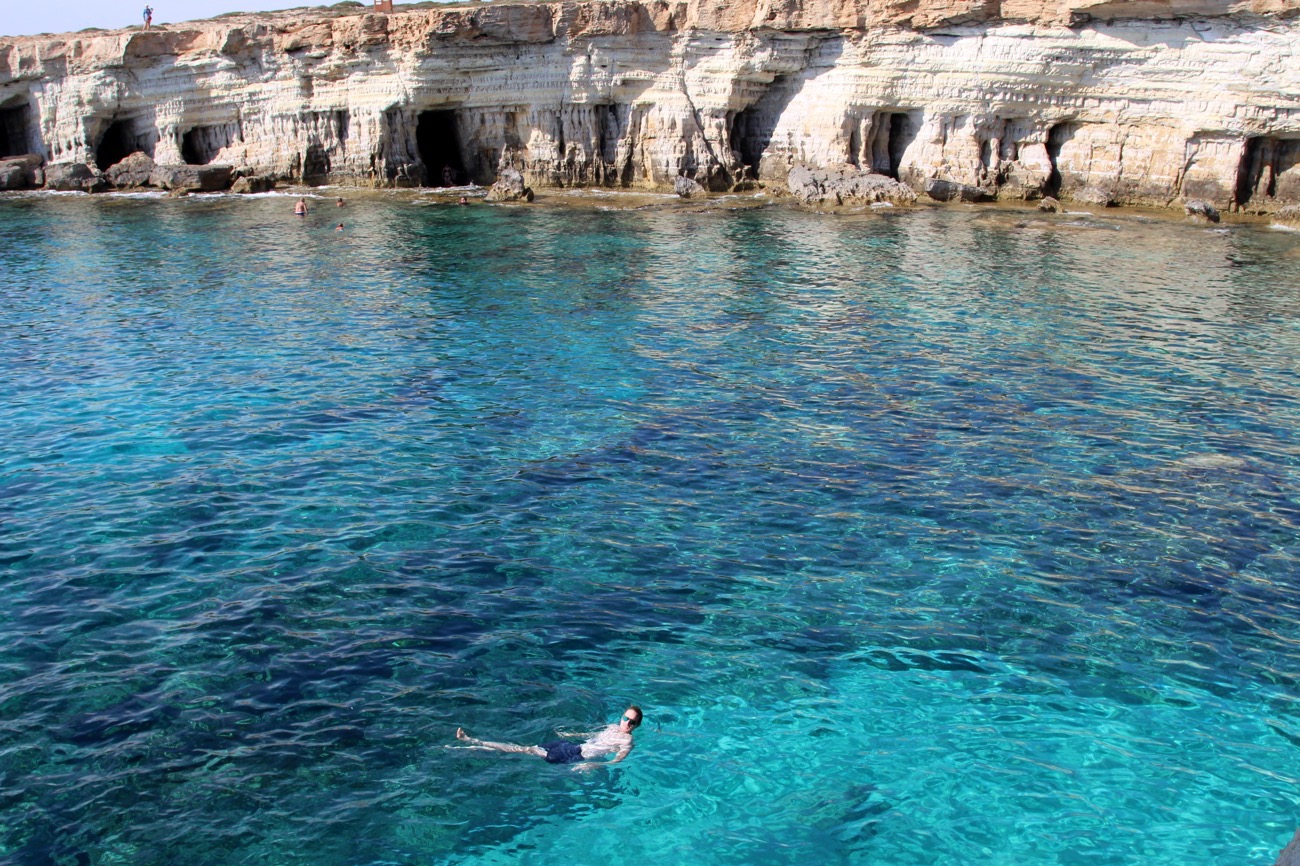 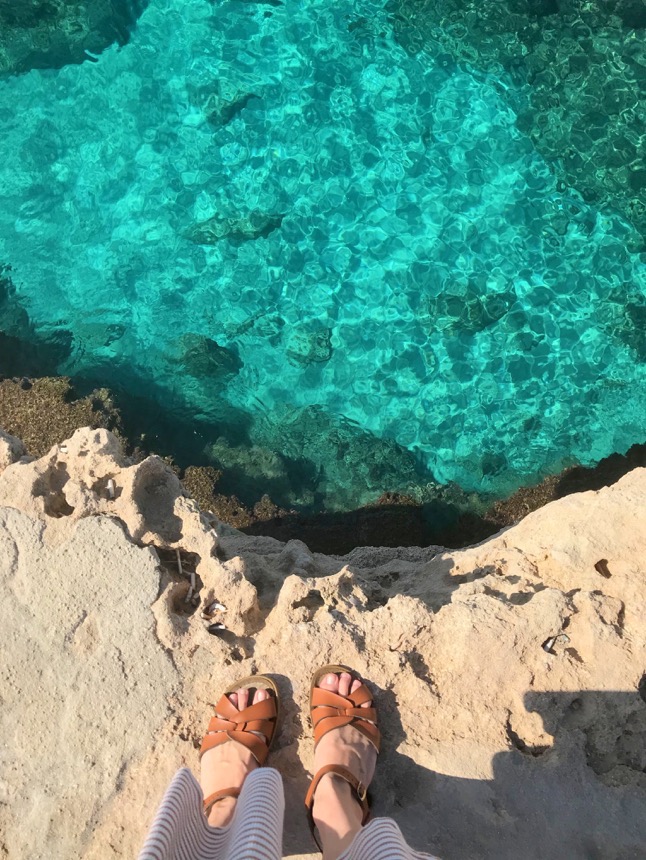 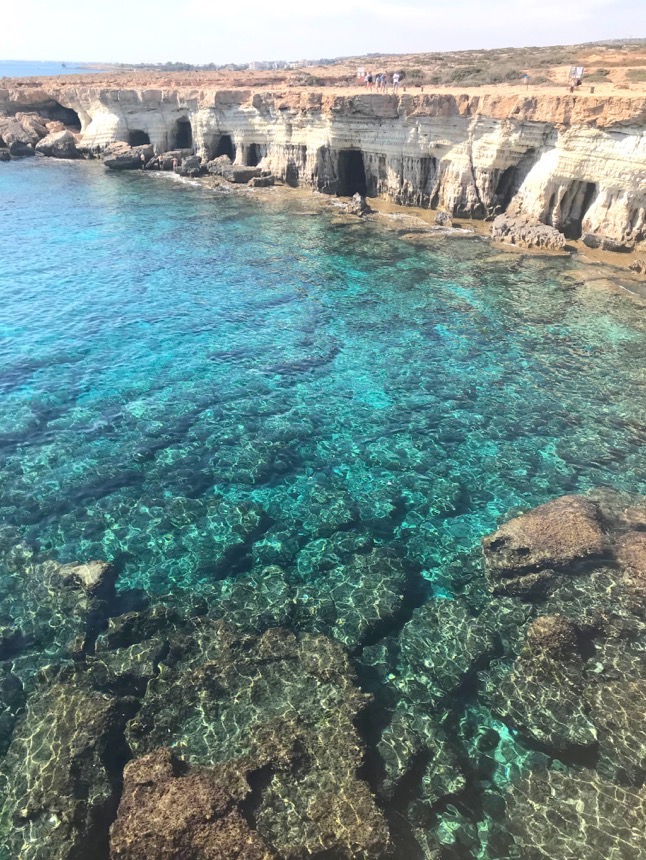 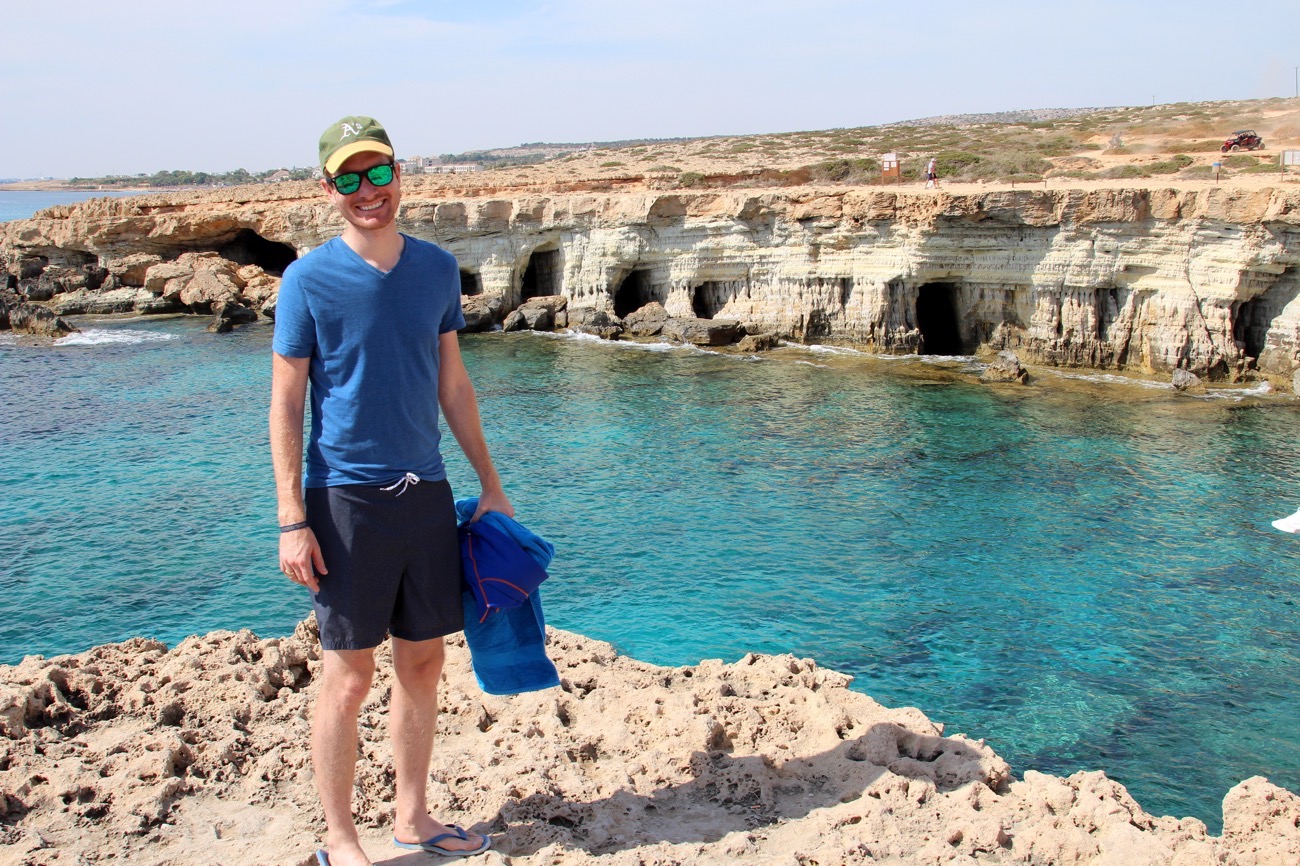 we also stopped by a sandy beach, which was very crowded.

but i can’t blame a lot of people for wanting to be there. the water was insanely clear and the sand sugary-soft! we didn’t stay long but it was cool to see. 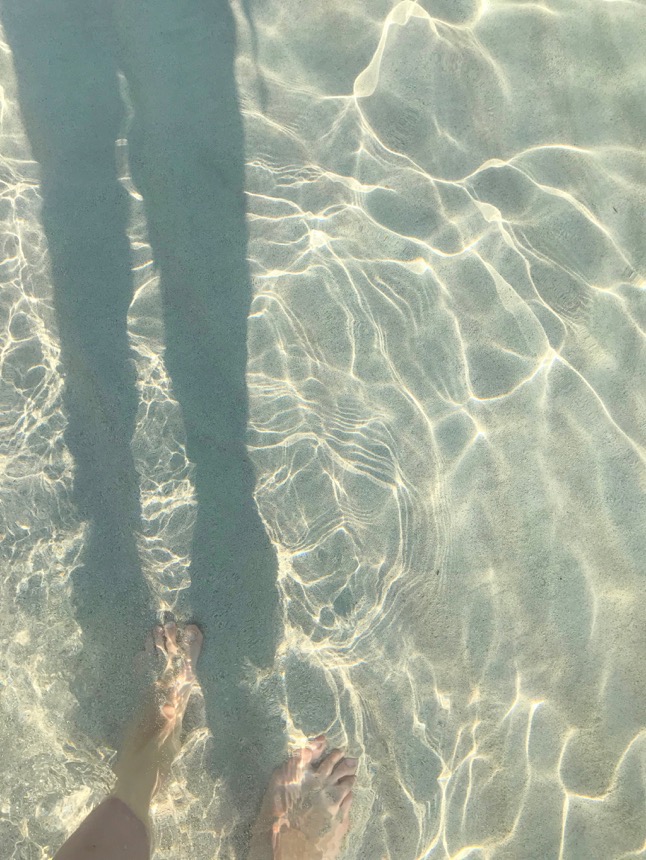 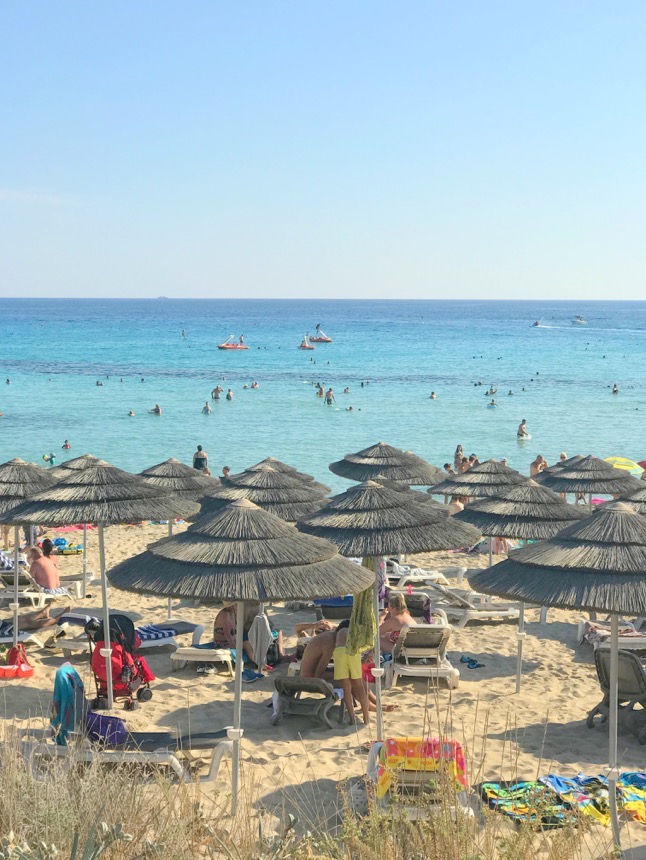 en route to our next hotel we stopped quickly to see this spot – “aphrodite’s rock” – as the sun was sinking.

the next morning was another slow one, hanging out by this pool: 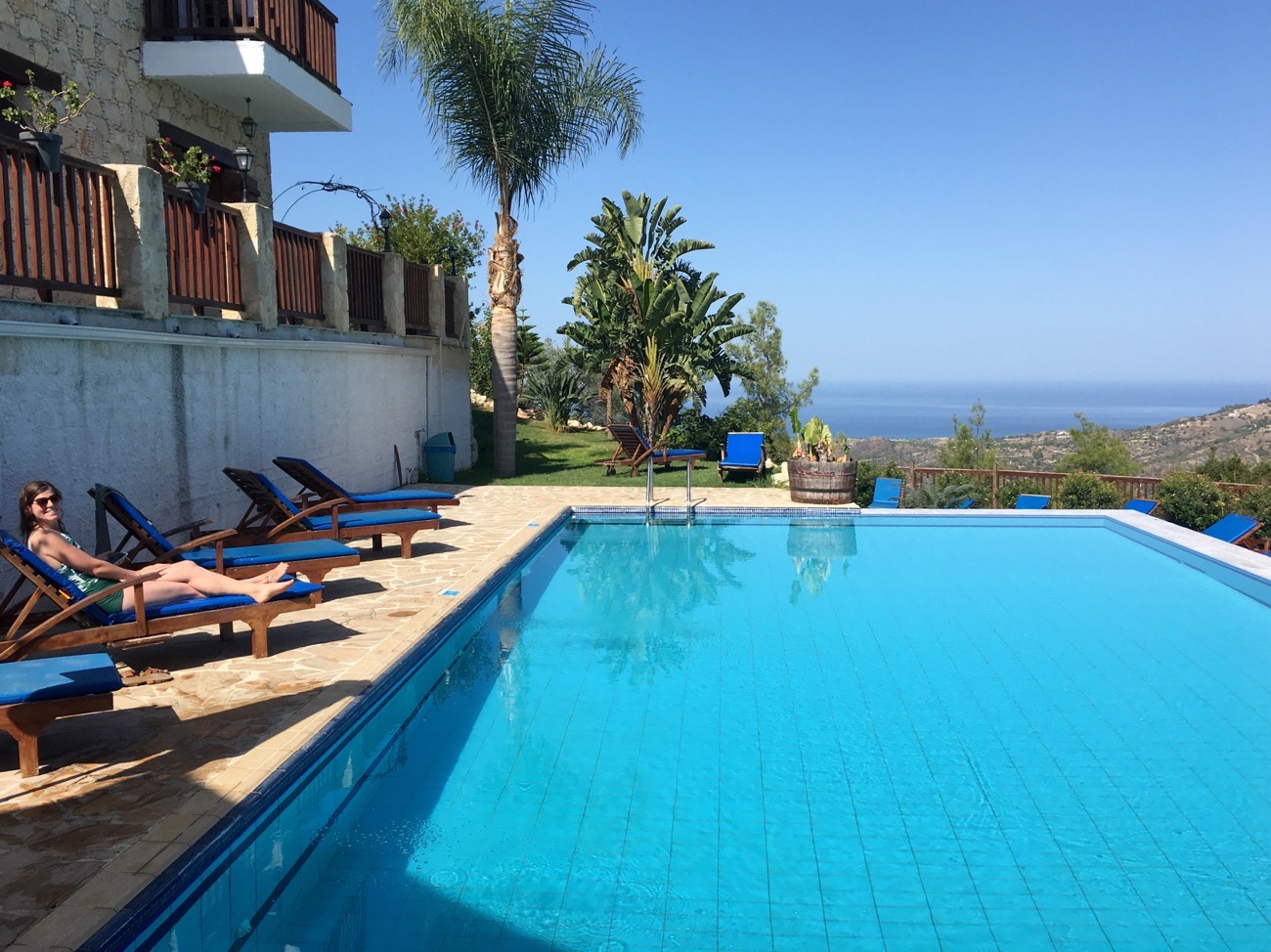 we stayed for one night up in the mountains of cyprus at a really cool b&b that some siblings built to honour a pipe-dream their father had, after he passed away. it was cozy and wonderful.

there is sooooo much bougainvillea in cyprus! when we drove past this door i said quickly to ian, “stop the car!” and we got out to snap some photos. we saw uncountable vines like this in the most vibrant colours all over the island.

on our last full day in cyprus, we hung out at this beach:

can you spot me frolicking in the water? a couple of times i had to just run into the waves and spin and dive in and lay on my back and float. just to reeeeeally enjoy my kid-less freedom.

we stopped by one other beach on our way to our hotel and they were renting out pedal boats that had tall slides on them. we knew we had to spring for one…! we had a seriously awesome time for a half an hour out on that thing.

one last sunset, enjoyed while eating dinner at the outdoor restaurant at our hotel: 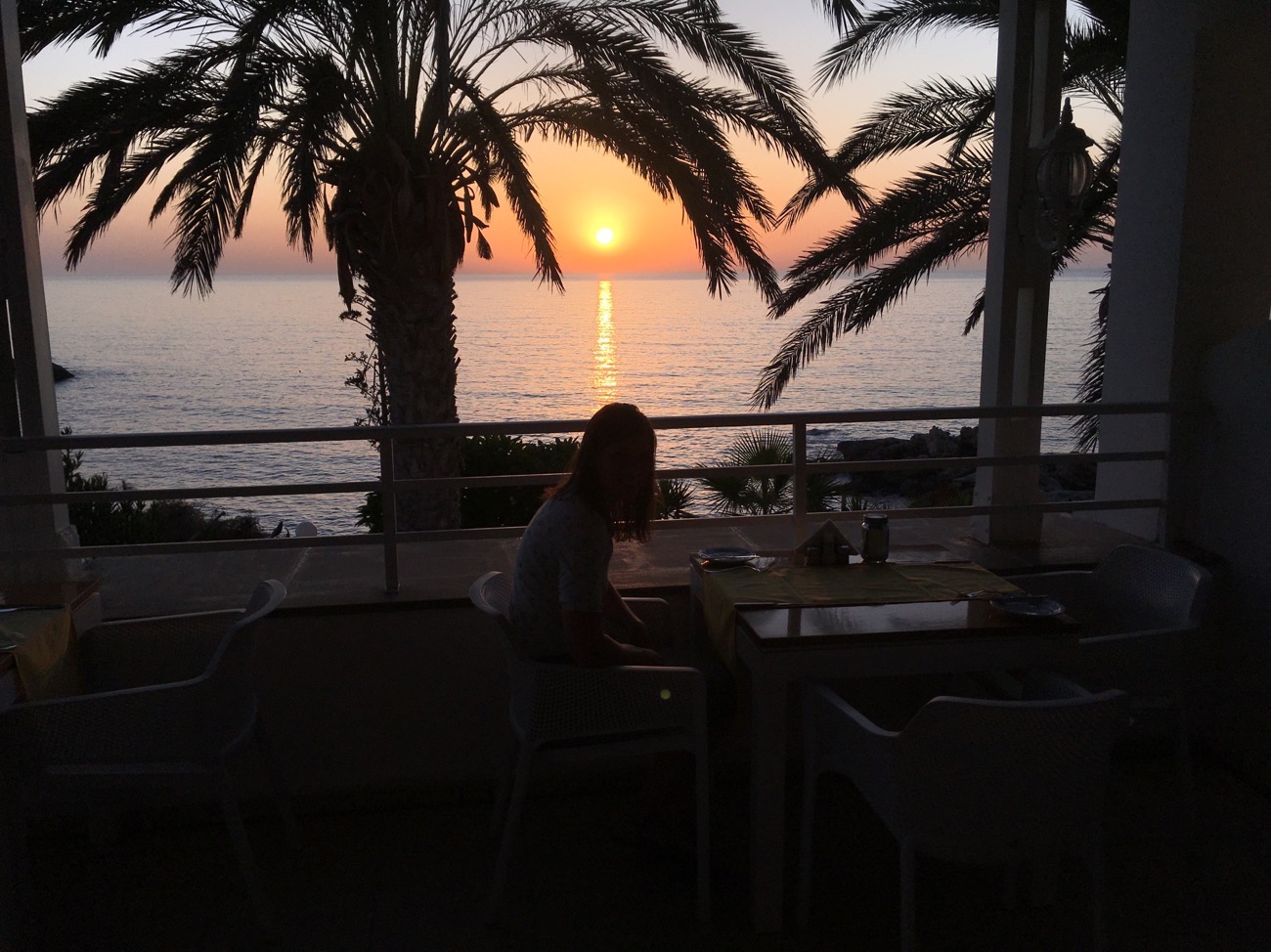 on our last day we went to church and then hung out by our hotel’s pool and the little pebbly beach it was perched over:

here’s to five more years. and fifty more after that. and five hundred after that! ian and i are becoming soulmates and it’s awesome.